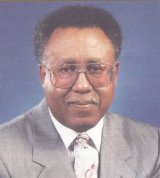 William Hamilton Harris is a prominent educator, administrator, author and lecturer. He earned a bachelor's degree at Paine College in his home state of Georgia and came to Indiana University to study for the M.A. and Ph.D. degrees.

He joined the faculty of IU's Department of History, and in nine years he rose from assistant professor to full professor. At IU he held numerous administrative positions, including acting affirmative action officer, director of the CIC Minorities Fellowships Program, and associate dean of the Graduate School. Dr. Harris has presented papers and lecturers before historical learned societies and at leading universities, and his list of publications, honors, and awards is long and impressive.

In 1978-79, he was a Fulbright professor and visiting professor of history at the University of Hamburg; in 1983-84, he was listed as one of the 50 most influential black Georgians. In 1982 he returned to his first alma mater, Paine College, as its president, and he served there with distinction for six years until he was called to the executive offices of Texas Southern.

In 1994-2000, Dr. Harris served as Alabama State University's president. Under Dr. Harris' leadership, the National Center for the Study of Civil Rights and African-American Culture, Business and Technology Center and Center for Leadership and Public Policy were established. New degree programs in health information management and occupational therapy were introduced, and graduate programs in accountancy and physical therapy were created.

In 2008, Dr. Harris once again took the helm as president of ASU, introducing a new vision to transform ASU through excellence in teaching, research, service and a diverse population. A dedicated, clear-sighted administrator, Dr. Harris works diligently on the challenges before him to place his university high in the ranks of American educational institutions.