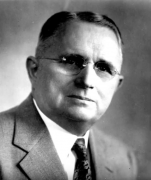 In the history of dental materials contributions, Dr. William Souder is second to none.

Known as the "Father of Dental Materials Research," Souder earned his A.B. and M.S. at Indiana University and his Ph.D. in physics and chemistry from the University of Chicago.

Souder would eventually become head of the Physics Dept. at Chicago, working as an Assistant to Nobel Prize winners. In 1919, he founded the Department of Dental Research in the National Bureau of Standards at the request of the Army Dental Corps, where for the first time, standards for dental materials were made uniform. In this position, Souder worked closely with the American Dental Association and formulated a specification for the purchase of alloys for dental amalgams.

He worked for 39 years with the National Bureau of Standards, focusing mostly on criminology and dental materials research. Also a profound criminologist and handwriting analysis expert, Souder was employed by the FBI to deconstruct ransom notes in the case of the Lindbergh kidnapping, and also testified at the trial of Richard Hauptmann for the prosecution.

For his worthwhile contributions to the science and art of dentistry, Souder was the recipient of numerous awards and accolades. A bronze plaque bearing his image now hangs at the NBS; it was donated by the Dental Materials Group of the International Association for Dental Research.

Initiated in 1955, the Dr. Wilmer Souder Award is given annually by the IADR's Dental Materials Group. The award is made on the basis of scientific achievement of outstanding quality that has advanced dental service to the public.