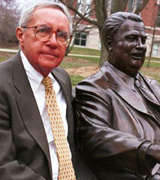 Chancellor Gros Louis received B.A. and M.A. degrees from Columbia and his Ph.D. in Medieval and Renaissance Literature from the University of Wisconsin. He joined IU in 1964 as a faculty member in the departments of English and Comparative Literature. Prior to being named in 1980 as Vice President for the Bloomington campus (as of 1988, Vice President for Academic Affairs and Bloomington campus Chancellor), he served as acting chair of Comparative Literature, chair of the Department of English, associate dean of the College of Arts and Sciences, and Dean of the College.

He is author of the two-volume Literary Interpretations of Biblical Narrative as well as many articles on literature, higher education, or academic administration. He won IU's Ulysses G. Weatherly Award for distinguished teaching in 1970 and has continued to teach during his service as an administrator and in retirement. He was elected in 1991 to the Indiana Academy.

As vice president and chancellor for the Bloomington campus, Gros Louis' principled and humane vision, as well as strategic savvy, were responsible for the establishment of the Office of GLBT Student Support Services in 1994. His support also was crucial to IU's adoption of domestic partner benefits in 2001. As an administrator as well as in retirement, he has been a powerful ally of the GLBT community and a mentor to many students.

Beyond IU, Chancellor Gros Louis served for 15 years as chairman of the Committee on Institutional Cooperation, a consortium of the Big Ten universities and the University of Chicago. He also served in various board or leadership roles with the National Research Council, the Indiana Committee for the Humanities, the North Central Association of Colleges and Schools, the National Association of State Universities and Land Grant Colleges, the National Commission on Library Preservation and Access, Monroe County United Way, the Monroe County Public Library, and Anthem Insurance, Inc.