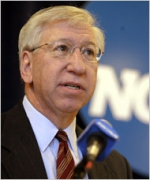 Dr. Myles N. Brand, visionary leader, educator and reformer, who was serving as President of the National Collegiate Athletic Association (NCAA) has died after a heroic battle with pancreatic cancer. He was 67.

Brand took the helm of the NCAA in January, 2003. In his first state of the association address that year, Brand said his presidency would be structured on two platforms: academic reform and advocacy of intercollegiate athletics - promises Brand made good on in his six year tenure.

Termed by many the "education president," Brand presided over passage of the most comprehensive academic reform package for intercollegiate athletics in recent history - a package that refocused the attention of student-athletes, coaches and administrators on the education of student-athletes. Brand also changed the national dialog on college sports to emphasize the educational value of athletics participation and the integration of intercollegiate athletics with the academic mission of higher education. His tenure helped re-establish the indispensable role of university presidents in the governance of college sports.

During the eight years Brand served as president of Indiana University, the institution experienced tremendous growth in almost every area including record enrollments and fundraising. Research grants and contracts more than doubled; the size of the university's endowment and the number of endowed chairs and professorships grew threefold. He provided national leadership in the areas of life sciences and information technology, overseeing the development of the IU School of Informatics. Brand's many contributions were recognized this past spring with an honorary Doctor of Humane Letters degree from Indiana University.