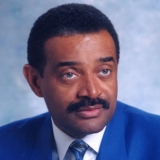 Before he joined the IU Northwest faculty in 1992, Smith was an assistant principal and then principal in the Gary Community School Corporation, as well as an adjunct lecturer at IU Northwest and Purdue University Calumet. He is now an Indiana state representative and an Associate Professor of Education at Indiana University Northwest.

When he's not teaching and mentoring students, advocating for public education initiatives, or speaking at local events and national conferences, you'll find Smith serving meals to prison inmates at Thanksgiving, bringing a boarded-up Gary theatre back to life, or organizing local teens to help senior citizens with household chores.

Smith is also the heart, head, and hands behind countless educational programs and civic endeavors. In response to the lack of youth involvement in civic and political activities in Gary, Smith organized Youth in Politics, the Young Citizens League, and Youth Ensuring Solidarity (YES). To revitalize the community's pride in Gary, Smith organized the Gary chapter of Focus Hope and the Stash the Trash campaign, an annual clean-up effort that focuses on Broadway Street.

He is the founder and president of IU Dons, Inc.; the founder and board president of African-American Achievers Youth Corps, Inc., in Gary; the founder of the Northern Indiana Association of Black School Educators; and the founder and sponsor of the Gary-based Vernon Stars. He is a member of numerous national, state, and community organizations, which include Omega Psi Phi fraternity, the Northwest Indiana Urban League, the Gary Reading Council/Indiana State Reading Association, the Brothers Keepers Shelter for Homeless Men, and the NAACP. In addition, he serves on several committees at the School of Education.

He received the Trustees Teaching Award in 2006 and in 2000 (when it was named TERA), and he received the Faculty Colloquium on Excellence in Teaching (FACET) Award in 1998.

Smith sat on the Gary City Council for 18 years prior to his election to the Indiana House of Representatives in 1990. As a legislator, Smith has served as assistant majority floor leader, and he is currently chairman of the Local Government Committee. He is the former chair of the Committee on Families, Children, and Human Affairs and is the founder and current chair of the Indiana Commission on the Social Status of the Black Male. Empowering and educating American youth and black male youth are a critical focus of Smith's political, academic, and personal mission, and Smith has published numerous writings on these topics.