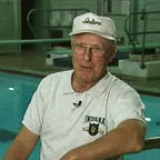 Hobie Billingsley was born and raised in Erie, Pennsylvania. When he was in high school, Ohio State swimming coach Mike Peppe and his great national champion, Al Patnik, visited Erie to give an exhibition at the state high school meet. Patnik, who was Hobie's hero, signed his autograph, and Peppe told Hobie he would make him into a national champion. At that time, if you wanted to become a great diver, there was only one place to go: Ohio State. Hobie became a Buckeye.

Billingsley also became one the most important and influential personalities in the history of diving, first as a competitor/performer, then as a coach. He was an NCAA Champion on the one- and three-meter boards at Ohio State, and for fifteen years he toured the U.S.A. and foreign lands putting on water and trampoline shows, first with the late Bruce Harlan, then with Dick Kimball. In 1964 he retired from the water shows to start a diving camp at Indiana University, where he became the second person hired as a diving coach on the college level. His camp was active for 25 years.

Although he was a wonderful performer, Hobie earned his lasting reputation as one of the greatest diving coaches in history. He was always a student of the sport and early in his career he applied the scientific approach to coaching, incorporating the mechanical principals based on Sir Isaac Newton's Laws of Motion. For more than four decades, Hobie has traveled the world lecturing, presenting clinics, and conducting camps for coaches and divers.

Hobie has been named the National Diving Coach of the Year by the American Swimming Coaches Association, was the first recipient of the NCAA Coach of the Year in 1988, and he was inducted into the International Swimming Hall of Fame in 1983. He was a 1987 recipient of the Bill Orwig award, and in 1994 he was presented with the Sammy Lee Award, the most prestigious award in the world for contributions to the sport of diving. Hobie was a five time Olympic coach and had the honor of reciting the Olympic Oath at the 1996 Olympics in Atlanta before a packed stadium and several billion-television viewers. He has written three books and numerous articles about diving.