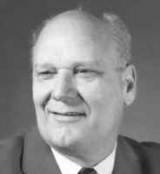 James E. Counsilman was born December 27, 1920, in Birmingham, Alabama. Jim's natural talent in the water was noticed by Coach Ernie Vornbrock, after he saw Jim swimming at an indoor pool at the Forest Park YMCA, and the two began training regularly after school. The national meet was held in St. Louis the year after Counsilman graduated high school, and he competed in several of the events. Ohio State swimming coach Mike Peppe saw Counsilman swim and was impressed by his performance. After a brief conversation with Peppe, Counsilman was soon on his way to Ohio State to swim for the Buckeyes. Counsilman adapted quickly to the college classroom and collegiate swimming competition. He set world records in the 50-meter and 300-yard breaststroke events early in his collegiate career.

In 1943, two weeks before the AAU meet, Counsilman was called to serve in the Army Air Corps; World War II interrupted his chances for a national title. Though the war was beginning to wind down, new troops were still being called. Counsilman was assigned to fly the B-24, a bomber. Shortly after he went off to training, Jim married Marge, his sweetheart, in June of 1943. Though Counsilman was frustrated with the interruption at what seemed to be the peak of his swimming career, he adapted to pilot training well. In January 1945, Counsilman and his crew were sent to Italy to join the Fifteenth Air Force in bombing industrial targets such as fuel refineries and factories. One mission was almost fatal; Counsilman's plane was hit by a piece of flak, cutting the hydraulic line. The damage disabled the brakes and forced Counsilman to crash land the plane in Yugoslavia, but miraculously, Counsilman safely returned every member of the ten-man crew to the base. The Distinguished Flying Cross was awarded to Counsilman for his bravery in action.

After the war, Counsilman returned home and a month later he was back at Ohio State as swimming team captain. Counsilman then earned a Master's degree at the University of Illinois where he also was an assistant coach. He went on to the University of Iowa where he earned his doctorate in physiology. James E. Counsilman, Ph.D., was shortened to "Doc" by his friends and family. The nickname followed him to a coaching job at Cortland State University in New York, where he was also a professor.

In 1957, Doc Counsilman moved his family to Bloomington, Indiana, and was assistant coach of the Indiana University men's swimming team. He also coached swimmers at the Indianapolis Athletic Club. In 1958, Indiana University named Doc Counsilman head coach. The history of the program was mediocre and Doc was challenged with building a strong swimming and diving program. He found a diving coach he knew from his days at Ohio State; Hobie Billingsley became Indiana University's first diving coach. Counsilman recruited several swimmers from the Indianapolis Athletic Club where he had been coaching, Royer Pool was being built, and construction was on track for completion by 1960. However, that year, the I.U. football program was put on probation, which at that time affected all university sports, prohibiting from competing in the national collegiate championships. Regardless, by relying on their reputations and the blind trust of young athletes, the coaching team recruited a handful of talented swimmers. In 1961, Indiana University won its first swimming and diving Big Ten Championship.

When the NCAA ban was finally lifted, Doc's Hoosiers were ready to show the country that they weren't just the best in the Big Ten, but they were the best in the nation. In 1968, Indiana University won its first NCAA Championship, setting off a string of six consecutive NCAA wins. There wasn't a team in the country that could compete with Indiana. Doc had successfully built a team of gold medalists and world record holders the likes of Charlie Hickcox, Jim Montgomery, and Mark Spitz. In addition to coaching Indiana University to an eventual 20 consecutive Big Ten wins, six consecutive NCAA wins, and 12 national AAU wins, Doc's success extended to the international arena. Doc was head swimming coach of the two most successful Olympic men's swimming teams in 1964 (Tokyo) and 1976 (Montreal). In 1976, the U.S.A. men's swimming team won 12 of possible 13 gold medals and brought home over two-thirds of all possible medals.

During his time at IU, Doc had also been a professor in the Department of Health, Physical Education, and Recreation. With Marge's help, Doc wrote several articles and books on his research findings. In 1968 The Science of Swimming was published. The book explained complicated scientific principles in language that anyone could understand. Coaches still use this book as a reference. In 1979, Doc carved yet another spot in the record books, this time for a very personal accomplishment. He swam the English Channel at age 58, and became the oldest man at that time to successfully complete the swim. The English Channel swim is considered to be one of the most difficult human feats. What made the swim even more difficult for Doc was that four years earlier he had been diagnosed with Parkinson's disease. Doc retired in 1991, after serving as men's swimming coach at Indiana University for 33 years. After his retirement, the university dedicated the Counsilman Billingsley Aquatic Center to the coaching duo that built the Indiana aquatic dynasty.