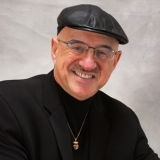 Tuba artist, teacher, pedagogue, and solo recitalist, Daniel Perantoni is an innovator in a variety of genres including chamber music and jazz. He has appeared as the featured artist at Carnegie Hall, the Monterey Jazz Festival, the Spoleto Festival U.S.A., the Adelaide Festival in Australia, the Banff Centre for the Arts in Canada, the Montreux Brass Congress in Switzerland, and recently as a soloist throughout Japan.

Mr. Perantoni was a founding member of Summit Brass, a member of Symphonia, the Saint Louis Brass Quintet, and the Matteson-Phillips Tubajazz Consort. He has produced numerous solo and chamber music CDs. Along with Robert Tucci, Mr. Perantoni designed the "Perantucci" line of low brass instruments and mouthpieces.

Mr. Perantoni serves as the vice president for educational matters and consultant/clinician for Custom Music Company. He received the Lifetime Achievement Award from the executive board of T.U.B.A. His students hold prestigious positions in major performing ensembles and music schools around the world.