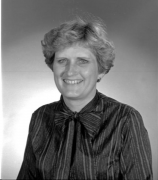 Elizabeth Kurpius, otherwise known as Coach Buzz, was Indiana University's associate athletic director for academics, and recruiter, mentor, tutor, adviser, programmer, friend and surrogate mother to IU's student-athletes for 26 years, until her retirement in 2000. The special relationship Kurpius and her staff had with IU athletes was known across the Bloomington campus. Faculty, students, administrators and coaches called Kurpius the standard-bearer in her field, having created a benchmark for her professional area while developing a model program.

Kurpius actually started in athletics, moving over from University Division, as an assistant football coach for Lee Corso in 1974. Not only was she responsible for academics, but she hit the road as a recruiter, signing two players - Marlon Flemming and Brett DeVault.

"I got a lot of negative publicity around the country because I said I was going to hire the first woman football coach," Corso said. "Everybody laughed, but in the long run that's probably one of the better things I've ever done in my coaching career. Buzz had a good background already. She was perfect for the position and she got the job over 125 who applied. She was a tremendous asset to me and she made a great contribution to IU athletics."

In 1976, Kurpius moved over to the administrative staff to counsel all of IU's male athletes. A few years later, women's sports came under the intercollegiate athletics department, thus, the academic office. Rules compliance and financial aid were also part of the academic duties. When she started the job, there were no models for Kurpius to follow, yet by 2000, Kurpius and her staff of three employed between 100 and 150 tutors to help the time-strapped athletes maintain their grades. The full-time staff met with each team to discuss the rules, went one-on-one with recruits to explain IU's academic requirements and expectations, met individually with the athletes to plan their academic programs, monitored grades and academic progress and worked with faculty and coaches to head off problems.

Throughout her tenure, there was no hint of faltering integrity; imposing tough standards and sticking by them was one thing Kurpius did without fail. She insisted that athlete's progress academically, and with honesty. She received exceptional cooperation from coaches and faculty, while hearing from students all the excuses and attempts to get around hard work. Somehow she had a knack for keeping them on the straight and narrow; IU consistently graduated 90 percent or more of the athletes who completed their eligibility, one of the best records in the country.