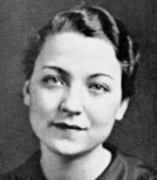 Miriam Meloy Sturgeon graduated from Indiana University-Bloomington with a B.A. in 1938 and M.A. in 1940. She was a staff member of the Indiana Daily Student, and was selected by the chairman of the Journalism Department to create the Journalism Department's first library. Sturgeon became a lifelong supporter of the Journalism school, working with the IU Foundation and the School of Journalism Development Campaign to raise $3 million for the remodeling of Ernie Pyle Hall in 1975 where the journalism library would be relocated. Sturgeon also served as the national president for Theta Sigma Phi in 1961-1963. In addition, she served as the president of the University Women's Faculty and Staff Club (1968-69) and the University Club Board (1975-76).

Sturgeon was married to Robert Sturgeon, a longtime assistant dean of the College of Arts & Sciences and passed away in 1979. The IU Foundation has created an award, Miriam Sturgeon Award for Partnership, in her honor.