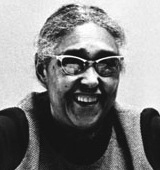 She was inducted into the Monroe County Hall of Fame for her civic work in the African-American community in 1999, and has a collection named for her in the Mathers Museum of World Cultures. Bridgwaters passed away at the age of 90 in 1999.