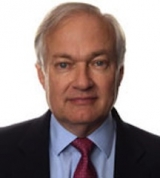 It's a good thing Sigma Alpha Mu housed some Chicago Black Hawks fans at Indiana University. Were it not for his fraternity brothers, Marion, Ind. native Donald Fehr might not have gotten an early taste of hockey culture" and as the executive director of the National Hockey Players League Association (NHLPA), that familiarity has served him well.

Fehr, a 2011 Distinguished Alumni Award recipient, received his NHLPA appointment last December, following 26 years as the executive director of the Major League Baseball Players Association (MLBPA). Fehr first became associated with the MLBPA when he assisted with the landmark Messersmith/McNally case of 1976, which enabled players to become free agents instead of remaining indefinitely bound to a team. He went on to serve as general counsel for the organization and became its acting director in 1983 and executive director two years later. As executive director, Fehr successfully challenged the owner's collusion of the late '80s, securing $280 million in damages for the players. He also shepherded the MLBPA through its strike in 1994 and the subsequent World Series cancellation.

Fehr hadn't anticipated a career representing professional athletes. Growing up in the suburbs of Kansas City, Mo. (where his family moved when he was in first grade), he was always a fan of baseball and football, but lacked the skills to be a star player. "I tried to play sports, but not very well," he says. Instead, he focused on his schooling and "a longtime interest in history and politics." His academic record earned him some tuition assistance at IU, where he received his degree in Political Science in the College of Arts and Sciences.

At IU, Fehr learned the principles of governance that laid the groundwork for his legal training at the University of Missouri Kansas City School of Law. Moreover, "It was at IU that I first had to think rigorously, and learn how to do that and reach a conclusion," he says. "That was, and remains, critical to success."

Fehr is known for his fierce negotiating skills and dedication to his players. As he begins this new phase of his career, he is hesitant to make predictions about how his time around the hockey rink will compare to his days at the baseball diamond. He notes, however, that the issues he's facing are common not only among all professional sports but across many different business sectors.

"Protecting individual rights and liberties against incursion, from government or from an employer or from corporations or other social institutions, is one of the great challenges going forward in the information age," he says.

In 2019, Fehr received Indiana Uniersity's Bicentennia Medal in recognition of his distinguished contributions to the university.