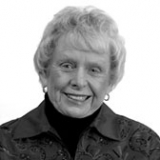 Obremskey and her husband, Pete, BS'58, LLB'61, founded the Herman B Wells (Boone County) Chapter of the IU Alumni Association. She serves on the chapter's board. A lifetime member of the IUAA, Obremskey served as the IUAA's vice chairwoman from 1996-97 and chairwoman from 1998-99. She also served on the IUAA Executive Council as a member at large from 1993-96. Obremskey served as a board member of the Woodburn Guild and as its president from 2000-02.

She has received the IUAA's Gertrude Rich Award, a community service award from the Boone County Chapter of the IUAA, and the IUAA President's Award. Obremskey and her husband reside in Lebanon, Indiana.