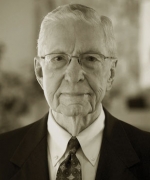 A distinguished Hoosier citizen, Don Brady Earnhart has had an impressive career in finance, industry, and philanthropy. With a B.S. degree in business from Indiana University, he began his career with Ernst & Ernst Public Accountants but soon settled with the inland Container Corporation, where he rose within two decades to the vice presidency.

His skills in finance recognized, he was named the administrative trustee of the Krannert Charitable Trust, which was dedicated to expanding the scope of education, the arts, youth programs, scientific and medical research, and health care in Indiana and the Midwest. His extraordinary leadership brought significant contributions to IU's medical research facilities, the new university library, the Krannert Institute of Cardiology, the Krannert Pavilion, and the University Place Hotel and Conference Center, projects that are cornerstones of recent development on the IUPUI campus.

Don was widely respected by the community of Indianapolis, where he made substantial contributions to the city's downtown revitalization and had been active in numerous civic projects; he also held directorships in numerous banks and corporations in Indianapolis and other Indiana cities. Loyal to his alma mater, he was on the executive council of the School of Business Alumni Association and was a member of the IU Foundation Board of Directors, providing leadership in obtaining funding and constantly seeking opportunities to serve.

Don was awarded honorary degrees by the University of Indianapolis and Indiana University. He also perceived a Distinguished Alumni Service Award from IU. He was named a "Sagamore of the Wabash" by Indiana Governors Edgar Whitcomb and Robert Orr and received a "Diploma of Honor" from the Fine Arts Society.