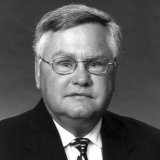 A. Bruce Burkart received a bachelor's degree in business in general management in 1972 from IU South Bend. Burkart, a senior vice president at 1st Source Bank in South Bend, and his wife, Cindy, are ardent supporters of the university, the Alumni Association, and particularly, the IU South Bend Alumni Association Scholarship Program.

The Michiana community also has benefited from Burkart's commitment to service. He has been active in the Kiwanis Club and is past treasurer of Camp Fire Girls, past president of Catholic Social Services, and a former board member of United Health Service and the Diabetes Association of St. Joseph County.

In recognition of his community service, Bruce received the Ernestine M. Raclin Community Leadership Award from 1st Source Bank in 2000.