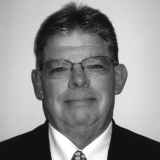 Greg Chamness completed a bachelor of general studies degree from IU East in 1984. As early as the late '70s, Chamness began working with the IU Alumni Association as a member of the Wayne County Alumni Club.

In 1989, he was instrumental in starting the IU East Alumni Association under the direction of then-Chancellor Charlie Nelms. He became charter president of that board and worked on several scholarship events early in its history.

In 1988, he led the effort to bring the IU Hoosiers to Richmond for a scrimmage football game. The proceeds benefited the library building on campus.

Chamness and his wife, Victoria, work jointly with other volunteers on the Mighty U — a program that brings elementary school students to the IU East campus to experience college and that helps plant the seed of the benefit of an IU degree. Chamness recently returned as an IU East Alumni Association board member after a few years of being an avid volunteer.

He works as the director of business development for Barnhizer & Associates Inc.