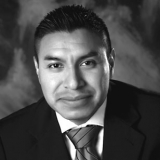 Diego Morales graduated with a bachelor's degree in communications with minors in political science and Spanish in 2004. While attending IU Southeast, he was active in student and community organizations, including serving as a student ambassador, a Student Government Association member, a student senator, and a member of the College Republicans.

Since graduating from IU Southeast, Morales has served as a member of the Indiana National Guard and will be attending the National Guard Officer Candidate School in January 2008. He also works as the only paid staff person on Mike Sodrel's 2008 congressional campaign.

Morales is often seen on campus attending alumni events, serving soda at a welcome event for new students, or volunteering at the alumni booth at various festivals. He has integrated himself into the familiar faces around campus and the community and is also a familiar face for members of Hoosiers for Higher Education. During his days at the Capitol, he was always there to greet HHE advocates, support Indiana University, and promote higher education.

He currently serves on the IU Southeast Alumni Board and continues to mentor and recruit students.