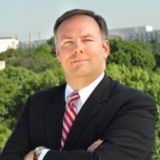 Gregory A. Castanias is a partner and head of the federal circuit practice at Jones Day in Washington, D.C. He has argued three cases before the U.S. Supreme Court and is considered one of the country's leading intellectual property attorneys.

Castanias has served the IU law school in countless ways, from mentoring current and prospective students to an eight-year tenure on the school's Alumni Board. Castanias returns to Bloomington frequently for board meetings, on-campus interviews and speaking engagements.