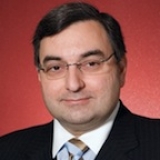 Ambassador Feisal Istrabadi focuses his research on the processes of building legal and political institutions in countries in transition from dictatorship to democracy. He brings a mulit-disciplinary approach to studying the emergence of constitutionalism in such societies, including questions of timing and legitimacy, issues of transitional justice, and the political and cultural factors which influence the process of democratization. Ambassador Istrabadi lectures often at universities and think tanks on Iraq-related issues. He appears frequently in national and international media.

He was the Ambassador Extraordinary and Plenipotentiary, Deputy Permanent Representative of Iraq to the United Nations, New York from 2004 to 2007. Prior to his diplomatic appointment, Ambassador Istrabadi served as a legal advisor to the Iraqi Minister for Foreign Affairs during the negotiations for U.N. Security Council resolution 1546 of June 8, 2004, which recognized the reassertion by Iraq of its sovereignty. He was also principal legal drafter of Iraq's interim constitution, the Law of Administration of the State of Iraq for the Transitional Period, and principal author of its Bill of Fundamental Rights. Before contributing to the reconstruction of Iraq, Mr. Istrabadi was a practicing trial lawyer in the United States for 15 years, with approximately 70 civil trials in federal and state courts, focusing on civil rights, employment discrimination, and constitutional torts. He also served a Senior Legal Fellow for Legal Reform and Development in the Arab World at the International Human Rights Law Institute at DePaul University's College of Law in Chicago.

Currently, he is the University Scholar in international law and diplomacy, Director of the Center for the Study of the Middle East, Professor at SPEA, and Adjunct Professor of Department of Near Eastern Languages and Cultures at Indiana University.