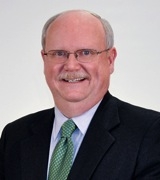 Brian Williams received his bachelor's degree in 1978 and his law degree in 1981, both from IU. He is a Co-managing partner at Kahn Dees Donovan & Kahn in Evansville, IN. Williams specializes in business, real estate, and trust litigation. An IUAA life member, he serves on the alumni board of the IU School of Law, Bloomington and has served on the IUAA's Executive Council.

Williams is a former president and board member of the Evansville Bar Association. He was one of 15 attorneys in the state named a Distinguished Barrister by Indiana Lawyer.

A longtime volunteer leader for the IU community, he was a member of the Maurer School of Law alumni board from 2003 to 2011, including a term as president. He has also served on the IU Alumni Association's Board of Managers. In his local community, Williams has served as president of the Boy Scouts of America Central Region, president and regional vice president for the Boy Scouts Buffalo Trace Council, secretary and legal counsel for the Evansville Industrial Foundation, and president of the Legal Aid Society.

Williams received the School of Law, Bloomington's Distinguished Service Award in 1998. He is the immediate past president of the Evansville Bar Association and a 2001 recipient of its Gresham Freedom Award.