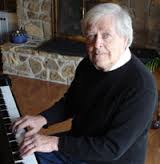 Robert E. Williams received a bachelor of science degree in music in 1956 and master of arts degree in speech and theater in 1964 from IU. He attended the Bloomington campus. Williams is a retired teacher living in Bloomington.

Williams is a board member on the IU Singing Hoosiers Alumni Council. He was the alumni group's president from 1990-95. A lifetime member of the IUAA, Williams served on its Executive Council as a member at large from 2000-03.

A pianist, he has released four albums, including Can't Get "Hoagy" Off My Mind, which features songs by Hoagy Carmichael, LLB'26, DM Hon'72. With his wife, Pat (Hargus), BS'60, Williams has performed a Hoagy Carmichael concert tour and presentation for the IUAA at various chapters around the country. He is the recipient of the Singing Hoosiers Distinguished Alumni Award and the IU Kokomo Alumni Association's Distinguished Service Award.