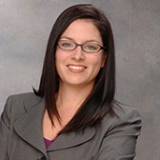 Under her leadership, the annual Fall Festival garnered the largest crowd ever, and an IU Alumni Day at the Kentucky State Fair was created, which contributed to a considerable increase in new alumni memberships. In 2008 Wolf received an Alumni Award of Excellence from the IU School of Arts and Letters and in 2009, the IUAA President's Award.