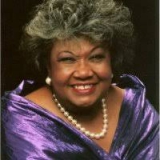 Louise Goggans received three degrees from Indiana University; a bachelor's degree in home economics in 1956, a master's degree in education in 1969 and a doctor of medical science degree in nutrition in 1982. She also has marriage and family therapy certification from Butler University.

As one of the charter members of the Neal-Marshall Alumni Club, Goggans has been an active leader in developing the Indianapolis chapter of the club. She recently stepped down as president of the IU School of Health and Rehabilitation Sciences Alumni Association, having served in that role since 2006. Additionally, she was a board member for the former Home Economics Alumni Club.