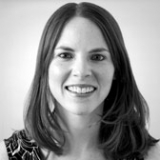 Ashley Marie Troncin completed her bachelor's degree in accounting in 2004 and her MBA in 2007, both at IU Southeast. She received outstanding distinctions for high achievement for both of her degrees.

Troncin works for the IU Southeast campus as an accountant, and she is an adjunct faculty member in the School of Business. She lives in New Albany, Indiana.