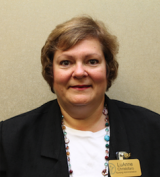 LuAnne Christofaro is the Director of med-surg/outpatient care/respiratory care at Reid Hospital & Health Care Services, where she has worked at since 1990. She was promoted to her current position in 2006 from Director of Technical Services at the hospital. She holds an associate's degree in nursing (1981), a B.S. in Nursing (1989) from IU East, and a master's degree in nursing administration from IUPUI.

Christofaro has been an active volunteer and supporter of the IU East Alumni Association and its School of Nursing, serving as treasurer and board member for many years. She was the treasurer of the IUSONAA and in 2005 received the IUAA's President's Award.