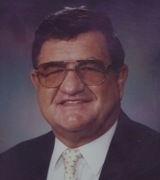 A two-way lineman in from Hobart, Ind., Don Howell played for the Hoosiers from 1954-57 and served as captain of the team in 1957. He played in the 1957 Blue-Gray All-Star Game. After graduation, Howell returned to his hometown of Hobart and served as an assistant coach and later as head coach at Hobart High School. He won over 300 games and was the second winningest coach in Indiana high school football history. Several of his former players have gone on to play football at Indiana University.

IU established the Don Howell Award, which is given to the most outstanding offensive lineman on the football team each year.