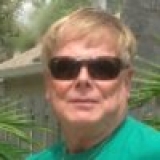 Dr. George Rector is a retired optometrist who currently works as a volunteer peer counselor for the National MS Society in Orlando. He worked as an optometrist from 1971 to 1996, and holds a B.S. and a O.D. from Indiana University.