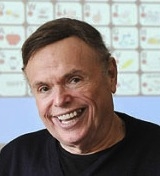 Bruce R. Baker is the founder and president of Semantic Compaction Systems, which developed the Minspeak system that enables people with unintelligible speech to communicate in a functional and efficient manner. The system also is capable of being translated into Spanish, French, Italian, German, Dutch, Danish, Norwegian, and Swedish, and encodes hundreds of words and sentences with a few keystrokes. Along with his company, he is also the founder of a nonprofit corporation known as Support Helps Others Use Technology,which studies employment issues for people with significant impairments. Baker is also an adjunct associate professor at the School of Health and Rehabilitation Sciences in University of Pittsburgh.

He has a bachelor's degree in Latin with a minor in Greek from Wabash College, and has studied at Indiana University and University of Paris. He earned a master's degree in French language and literature from Middlebury College in 1976. Baker has been recognized for his work with awards from many organizations, including Indiana University, United Cerebral Palsy in Washington, D.C., and the International Society for Augmentative and Alternative Communication in Toronto, Canada.