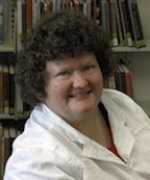 Baldwin first graduated from IUPUI with a B.S. in business administration in 1982, and then enrolled at Indiana University in Bloomington for her masters' degrees in library science and educational psychology.