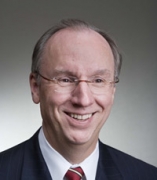 A highlight of his academic leadership is elevating the public perception of IUPUI as "Destination Health and Life Sciences" and strategically focusing campus efforts in areas of economic development important to the state.

Another focus has been enhancing undergraduate education. He has been an eloquent advocate for undergraduate, graduate, and professional programs that help keep graduates in Indiana. He has been active in fostering diversity and encouraging better math, science, engineering, and technology education.

He is deeply involved in the community through service on the Executive Committee of the United Way of Central Indiana and several other boards. He is the 2011/2012 president of the Economic Club of Indiana Board of Governors.

He has been active nationally on matters of importance to the higher education community, including having been a member of the NCAA Division I Board of Directors and the NCAA's Executive Committee from 2007 to 2011. He is Vice Chair of the Coalition of Urban Serving Universities and Chair of the Association of Public and Land-Grant Universities' Commission on Urban Initiatives. He is also a member of the American Council on Education's Commission on International Initiatives.