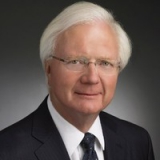 A successful businessman and philanthropist, Shoemaker earned a bachelor's degree from Hanover College and an M.B.A. from the Kelley School of Business at Indiana University. Since that time he has been giving back to Indiana University through his service, his support of innovative technology and entrepreneurship programs, his dedication to IU students' success and well-being, and as a champion of the Kelley School of Business's world-class faculty. He joined the staff of Xerox in the 1960s and rose to the position of senior vice president before joining Sun Microsystems. He retired from that company in 2002 as executive vice president and general manager for computer systems. Since then, he has served on several boards, including the board of Altera Corporation, SonicWall, and currently serves as chair of the board of Extreme Networks, Incorporated.

Well known for his proactive approach, his generosity, and his can-do attitude, he has long been an active supporter of and advisor to the Kelley School of Business. With the establishment of IU's School of Informatics, Computing, and Engineering (SICE), Shoemaker has extended his philanthropy and shared his expertise to help make Indiana University a leader in technology entrepreneurship. A substantial gift from Shoemaker and his wife, Donna Shoemaker, funded the Shoemaker Innovation Center, housed in the recently completed Luddy Hall, home of SICE on the Bloomington campus. The center is a university-wide source of support for innovation and entrepreneurship at IU.

Shoemaker commitment to Indiana University extends beyond Bloomington as he has been an important liaison for IU and the tech-savvy environment in Silicon Valley. He has volunteered for the Kelley School's West Coast Entrepreneurship Advisory Board and has been a key contributor and facilitator of the Velocity Conference, which accelerates entrepreneurial careers of graduate students from the Kelley School, SICE, the Paul H. O'Neill School of Public and Environmental Affairs, and the Biotechnology Program in the College of Arts and Sciences.

A champion of research and education, Shoemaker has led fundraising efforts for cancer research at the University of California, San Francisco, and is a steadfast supporter of Hanover College. He and his wife have also hosted and mentored more than 100 international students during their time at Stanford University.