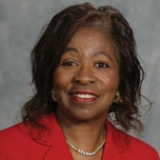 Breckenridge began her career taking IU classes through the extension program at the Calumet Center in East Chicago before transferring to IUB to complete her degree. During her undergraduate career she worked part-time for IU professors Lee Norvelle of the Department of Speech and Theatre and Dr. Frye in the Department of Zoology. She served as the vice president of the Pleiades Honorary Society, secretary of the senior class, member and secretary of the Alpha Kappa Alpha (AKA) Sorority, member of the IU Student Foundation, and was elected a member of the prestigious Mortar Board.

After completing her master's degree, Breckenridge spent the next three decades working as a speech language pathologist in East Chicago, Kokomo, Indianapolis, and Elkhart Community Schools of Indiana, as well as in Royal Oaks, Michigan. Elected to the IU Board of Trustees in 1997, she retired to focus her energies on integrating the last all-white bastion of a public university governing board in the state. She focused on three major issues: keeping higher education accessible and affordable, retaining and recruiting students, and recruiting and retaining top-notch faculty and administrators.

Breckenridge's service expanded beyond her work for Indiana University. She also served as president of the Elkhart County NAACP and was elected as a member of the National Board of Directors of the NAACP from 2000 until 2012.

Breckenridge received the IU Bicentennial Medal in September 2019 in recognition of her distinguished service on the IU Board of Trustees.