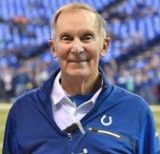 One of the nation's top orthopaedic surgeons, Dr. Arthur Rettig has had a longstanding relationship with the IUPUI Athletics Department, dating back to 1977 when he began work at St. Vincent's Hospital in Indianapolis. Through his work at Methodist Sports Medicine, he's widely regarded as one of top sports medicine, shoulder, knee, hand, wrist and elbow specialists in the country and is the long-time team physician and lead team orthopedist for the Indianapolis Colts.

He was honored with the 2003 Jerry "Hawk" Rhea Outstanding NFL Team Physician of the Year and was co-recipient of the Indiana State Medical Association's Commission on Sports Medicine 2003 Team Physician of the Year. The Indiana Football Coaches Association inducted him into its Hall of Fame in 2010. His contributions to IUPUI were recognized with his receiving the Spirit of Philanthropy Award. It's estimated that Rettig has been on the sidelines for more than 1,000 IUPUI competitions during his illustrious career.

Rettig has also been a consultant for the Indiana University basketball program and has remained active with the athletic programs at North Central High School. Rettig, a native of Muncie, Indiana, earned his B.S. from Yale in 1963 before completing his MD at Cornell in 1967.