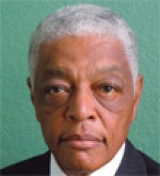 James McGee spent the majority of his 30-year Foreign Service career overseas working in support of U.S. government policy. McGee served in the U.S. Air Force during the Vietnam War from 1968 to 1974, earning three Distinguished Flying Crosses. After serving with distinction for 19 years as a State Department management officer, he was nominated and confirmed as ambassador to the Kingdom of Swaziland from 2002 to 2004; Madagascar and the Comoros Islands from 2004 to 2007; and Zimbabwe from 2007 to 2009. During these appointments, McGee worked to expose political violence and increase international pressures on violent regimes in Zimbabwe. He combated human trafficking and the spread of malaria in Madagascar and Zimbabwe, and supported HIV/AIDS intervention activities, hospice care and other medical institutions in Swaziland.

He then returned to the National War College in Washington, D.C., as the senior advisor to the director of the African Center for Strategic Studies. As his most recent assignment, McGee opened the first political military office to provide diplomatic advice and guidance to the Commander, U.S. Naval Forces Europe-Africa/U.S. 6th Fleet. McGee is a member of the American Academy of Diplomacy. He serves on the board of directors of the Council for a Community of Democracies and the Global Alliance for Zimbabwe.

McGee's skills and expertise in political and military affairs, crisis management, international negotiation and diplomacy have resulted in recognition from a number of sources, including the Mark Palmer Prize, which honors diplomats actively engaged in the realization of new standards in the field created by the Warsaw Declaration. In 2008, Secretary of State Condoleezza Rice honored McGee with the Diplomacy for Freedom Award. McGee graduated from Indiana University with a bachelor's degree in political science in 1977.