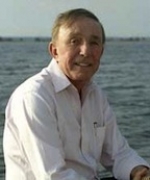 William J. Godfrey, a native of Fish Lake, Ind., is president of Acorn & Associates in Hilton Head, S.C. Growing up in the small LaPorte County community, Godfrey raised and sold tomatoes as a young boy. After the death of his father, he worked full time in a factory while still in high school. In 1960, he entered IU as a "resident scholar" and earned a bachelor's degree in business four years later.

While at IU, he entered into several successful business ventures that enabled him to put his brother through IU and pay off the mortgage on his mother's home.

After serving in the U.S. Army from 1965 to 1967, Godfrey returned to IU and received a Master of Business Administration in 1968. He served as head of support services for faculty engaged in Executive Education. Among the faculty were Bill Haeberle, now professor emeritus, and Ed Williams, now vice president emeritus and professor emeritus of business administration. After leaving IU, Godfrey joined Richardson-Merrell in Cincinnati and marketed the firm's pharmaceutical products in Latin America and the Far East. When the firm was bought out by Dow Chemical, he joined Bausch & Lomb in New York and became president of its international division.

After turning 40 in 1982, Godfrey went into business for himself and bought an interior design company headquartered on Hilton Head Island, S.C. Later, he operated a portable toilet business to serve the area's burgeoning construction industry. From 1985 to 1988, he was president of Sterling Drug and its Glenbrook Laboratories and Winthrop Consumer Products.

He also bought land in the area and created a large mixed-use real estate development near Bluffton, S.C. He retained ownership of the original land, which comprises the majority of the estate Godfrey has bequeathed to the Kelley School. Valued at $25 million, the estate is expected to escalate as land prices climb. A portion of the total commitment will service the graduate and executive education center dedicated in 2002. Upon Godfrey's death, the remainder will provide need-based scholarships for business undergraduates and the school's Systems and Accounting Graduate Programs.

For his generous service to the university and accomplished career, Godfrey received the Distinguished Entrepreneur Award from IU in 2013.