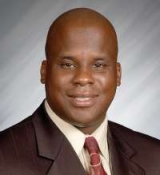 Jimmie L. McMillian is a partner in Barnes & Thornburg LLP's Indianapolis office and a member of the Litigation Department. He represents clients on a variety of legal matters, including products liability claims, personal injury lawsuits, contract disputes and criminal defense matters.

McMillian is a member of the National Bar Association, Indiana Bar Association, Indianapolis Bar Association, Marion County Bar Association, and Kappa Alpha Psi Fraternity, Inc. In 2007, National Bar Association President Vanita Banks appointed McMillian to be her Deputy Chief of Staff. He also serves as a member of the Board of Directors for Reach for Youth, Inc. and participates in their Teen Court Program, a juvenile diversion program for first-time offenders. In 2005, he received Barnes & Thornburg's Pro Bono Attorney of the Year Award and the Honorable Carr L. Darden Leadership Award. In 2006, he was recognized by The Indiana Lawyer as one of 10 "Up and Coming Lawyers" and received the publication's Leadership in Law Award. He was recognized by the Indianapolis Business Journal as one of 2008's "Forty under 40," an award attributed to the top 40 Indianapolis professionals under 40.