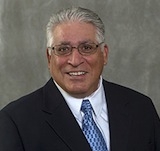 Albert Velasquez is an administrative law judge in the Indianapolis Office of Disability Adjudication and Review, and one of the first Hispanic graduates of Indiana University Maurer School of Law.

A first-generation Mexican-American, Velasquez was born in 1944 in Chicago and named after his father. His family eventually settled in Marion, Ind., and younger Al graduated from Bennett High School. He attended Loyola University of Chicago from 1962 to 1964 and the IU School of Business (today the Kelley School of Business) from 1965 to 1967, earning a Bachelor of Science in business insurance.

Like his father, Velasquez enlisted in the U.S. Army; he served in Vietnam in artillery units, eventually earning the rank of captain. Within a month of being discharged in April 1971, he enrolled at the IU School of Law (today the Maurer School) and settled in Bloomington with his wife and young family. In August 1973, Velasquez graduated from IU with a law degree and moved to Phoenix, where he served as an assistant attorney general for the state of Arizona for two years. While there, he did post-graduate studies in real estate finance and business management at Arizona State University.