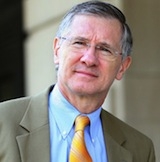 During his career in university fundraising, Kirsch has also worked for Indiana University, University of California at Berkeley, and Drake University. He is also a current faculty member of the Big Ten Fundraisers Institute.