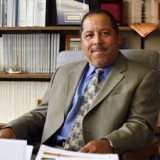 Edwin C. Marshall is one of the nation's leading professors and scholars in the field of optometry, having taught in the School for more than 30 years. He has also served as IU's vice president for diversity, equity and multicultural affairs. During this time, enrollment of minority undergraduate students at IU increased from just over 14 percent of domestic enrollment when Marshall began in 2007 to nearly 20 percent at the end of 2012. Marshall also directed the creation of diversity plans at all IU campuses, launched and led the President's University Diversity Initiative and worked with the IU Bloomington provost to more than double the amount of scholarship funds available through the Hudson and Holland Scholars Program.

Marshall has four degrees from IU: Doctor of Optometry, Master of Science, Bachelor of Science in optometry and Bachelor of Arts in zoology. In addition, he holds a Master of Public Health degree from the University of North Carolina, Chapel Hill.