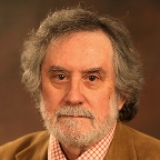 George Bodmer joined the university in 1982 and has taught professional writing, American literature, and children's and adolescent literature in the English Department. Most of his research has been in the field of children's literature, specifically on illustrated texts. This academic interest is matched with his work as a printmaker, and he frequently exhibits in Chicago, where his work is currently on display in two shows.

Bodmer has been active in the field of children's literature, having co-edited one of the major journals in the field, The Lion and the Unicorn, published by Johns Hopkins University, as well as presenting papers here and in England on illustrated texts. He has also published articles on artists such as Maurice Sendak, Walter Crane and Bruno Munari.