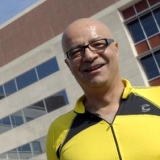 A highly sought-after consultant by oncologists worldwide, Dr. Rafat Abonour has dedicated his professional life to groundbreaking research and first-rate patient care. Abonour is director of the IU Melvin and Bren Simon Cancer Center Adult Clinical Research Office, associate dean of clinical research and associate professor of medicine, pathology and laboratory medicine at the IU School of Medicine. His research is focused on autologous stem cell transplantation (using one's own bone marrow cells in a transplant) and hematologic (blood) malignancies.

Abonour established the first clinic devoted to multiple myeloma patients in the state of Indiana, championing a new mode of treatment that is now being used by other groups around the world and serving as a source of inspiration for further research. In addition, with the help of a committee of his patients and their family members, he initiated the Miles for Myeloma fundraising event, personally running and bicycling to several Indiana cities. When discussing Miles for Myeloma, Abonour said to a room full of his patients, "Since all of you travel so many miles to come to me all the time, why don't I try coming to you?"

Starting in 2005, he and his fellow cyclists have covered more than 1,600 miles on Hoosier roadways and have raised more than $2.3 million from more than 9,500 donors to support the challenge of curing this rare and currently incurable blood cancer. Abonour also played a key role in securing planned gifts that will total an additional $1 million when realized.