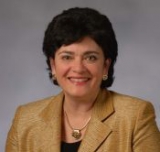 Her fundraising career began at the Indiana University Foundation in 1985, where she worked on a large scale comprehensive campaign and managed the major gifts team covering southern Indiana. In 1987 she accepted a position with Indiana University School of Medicine. Since then, she built the major gifts program, managed the annual fund, staffed a variety of boards, and orchestrated several successful capital campaigns. She became Associate Dean for Development in 2005.

Liz and her husband, Dave, live in Bloomington, Indiana. They have two grown children.