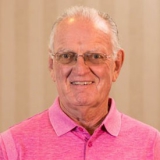 Nicholas Hipskind received his B.S. from Ball State University in 1962, and his Ph.D. from Michigan State University in 1968. Nick furthered his professional career at Indiana University with the Speech and Hearing Sciences Department, here he flourished holding multiple positions including University Division Associate Dean, Professor Emeritus, and President of the IU Varsity Club. Outside of Indiana University, Nick has influenced numerous others through his contributions to the community's health by promoting and implementing programs such as the hearing screening program for Head Start Bloomington and for the elderly in collaboration with Bloomington Hospital, and by serving of the Abatement Committee for the city of Bloomington.

Nick's contributions transcend the Bloomington community, serving as chairperson for the Indiana Speech-Language-Hearing Association (ISHA) and Indiana Board of Examiners in Speech Pathology and Audiology (IBESPA), and being an active member of the American Speech-Language-Hearing Association's (ASHA) program committee. His contributions to the State of Indiana earned him the recognition of Sagamore of the Wabash in 1988, the state's highest honor. His service to the state of Kentucky also earned him their states highest honor in 1993, the Kentucky Colonel award. Indiana University-Bloomington's Campus Life Division then presented them with its award for outstanding faculty member, recognizing his three decades of service to its students in 1999.