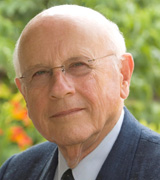 John W. Ryan served Indiana University as President from 1971 to 1987. His leadership advanced in significant and lasting ways the quality of the University and its distinction within the state, nationally, and internationally.

In 1968 he was called back to Indiana University as vice president and chancellor for regional campuses. For the next three years he greatly advanced the development of the regional campuses and the administrative coordination of the University system.
John Ryan was appointed President in January of 1971. During the nearly seventeen years of his administration, the University was strategically strengthened in endowment; budget; enrollment; degree programs; campuses and schools; and academic, research, and cultural facilities. He coordinated the eight campuses into a wider University organization that is unique for its administrative structure and dedication to common goals. This in turn enhanced the University's contributions to the educational, economic, and social development of the state.

Dr. Ryan's leadership in numerous national organizations contributed importantly to the reputation of Indiana University as a major participant in the concerns of American higher education. His international expertise resulted in a substantial increase in the University's academic and research affiliations with universities abroad, and its role in the educational development of several countries. His profound sense of the values of higher education and his vision for the future built upon the traditions of Indiana University to advance the creation of an institution of high quality, breadth, and substance.