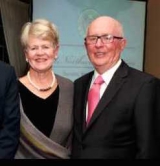 John R MacLennan's engagement with IU began during his time as a student, when he was a member of the Student Athletic Board and the IU Student Foundation. Though a graduate of IU Bloomington, MacLennan has given nearly four decades of service to the regional campus IU Northwest, including his instrumental role in the creation of the IU Northwest alumni association.
He and his wife, Elizabeth "Betsy" MacLennan, were integral in creating the annual IU Northwest Scholarship Gala fundraising event, and they have worked on the gala since its 1986 inception. In 2002, MacLennan helped establish the Chancellor's Society. He has raised funds for the Chancellor's Scholarship for the Arts, honoring students from underrepresented populations who are working toward a Bachelor of Arts in fine arts or theater. In addition, he has served on the Well House Society Advisory Board.