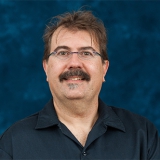 Professor Firulli received a B.S in both Chemistry and Biology from Roger Williams College in 1987, and completed his Ph.D. in Biochemistry/Molecular Biology in 1993 from Roswell Park Cancer Institute, State University of New York at Buffalo in the laboratory of Dr. Alan Kinninburgh. Dr. Firulli completed his postdoctoral training in 1997 in the laboratory of Dr. Eric Olson at the M.D. Anderson Cancer Center and UT Southwestern. Dr. Firulli then joined the Department of Physiology at the University of Texas Health Science Center at San Antonio as an Assistant Professor in 1997. He joined the Indiana University School of Medicine, Riley Heart Research Center in 2003 and is currently a Professor in Pediatrics with secondary appointments in the Departments of Medical and Molecular Genetics, Anatomy & Cell Biology, and Biochemistry.
Professor Firulli's research expertise is focused on transcriptional regulation during development, with a particular interest in the cardiovascular system. Dr. Firulli has made several extremely important contributions over the years, including the generation of one of the first knock-out mouse models of cardiomorphogenic transcription factors (Nature Genetics 18:266, 1998), has shown that aberrant post-translational modification of bHLH transcription factors can result in pathophysiologic development in humans (Nature Genetics 37:373, 2005), and that a sub population of post migration cardiac neural crest cells can be induced to trans-differentiate from cushion mesenchyme to sympatric neurons (PLoS Genetics (9(3):e1003405. 2013 doi:10.1371/journal.pgen.1003405).
Professor Firulli was elected to Who's Who Among Students in American Universities and Colleges in 1986 and 1987, inducted into the Alpha Chi National Honor Society in 1987, named a William C. Gibson Neuromuscular Disease Research Fellow in 1993, and an American Heart Association Established Investigator in 2005. He was named the Carleton Buehl McCulloch Professor of Pediatrics in 2014.