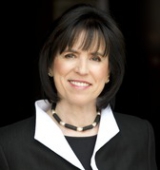 Indiana University alumna Harriet Newman Leve is a Tony award-winning Broadway producer. Perhaps best known for her work with "Stomp," which blends rhythmic sound, dance and musical performance, Leve has produced some of Broadway's most acclaimed shows. Currently, she's producing one of Broadway's newest shows that's already garnered plenty of media buzz: "Hedwig and the Angry Inch," a musical comedy that tells the story of a transgender rock goddess. The title role is played by Neil Patrick Harris, and the show will open in April 2014.

Leve's production of "Beautiful: The Carole King Musical" opened in January in New York's Stephen Sondheim Theatre. The show tells King's story from her early days as a Brooklyn teenager struggling to enter the record business to her years spent as a chart-topping music legend. Leve's credits also include "Ann," about the late Texas governor Ann Richards; the production of "War Horse" at Lincoln Center, which tells the story of a boy's beloved horse sold to serve in the cavalry during World War I; the production of Alfred Hitchcock's "The 39 Steps," a riff on Hitchcock's 1935 film; and the Tony Award-winning production of Alan Ayckbourn's "The Norman Conquests," which depicts Norman's ardent pursuit of his sister-in-law.