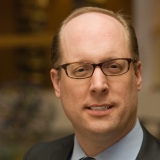 Austen Parrish is dean, James H. Rudy Professor of Law, and Class of 1942 Wells Scholars Professor in the Indiana University Bloomington Maurer School of Law. Parrish earned his bachelor's degree from the University of Washington and J.D. from the Columbia University School of Law. Before his appointment at IU in 2014, he served as interim dean and CEO if Southwestern Law School in Los Angeles. From 2008-2012 he was the school's vice dean, with responsibility for its overall academic program.

Parrish is a well-known and widely published scholar in transnational law and the use of domestic law institutions to address global changes. In his recent publications, he has focused on critiquing the use of extraterritorial domestic laws and the role that national courts play in solving global challenges. His experience as both scholar and administrator fits closely with Indiana Law's focus on finding innovative ways to prepare students for the challenges of the global legal profession.

Parrish has taught a variety of courses throughout his career, including Civil Procedure, Constitutional Law, Federal Courts, International Environmental Law, and Public International Law. He is the author of numerous scholarly articles that have been published in leading law reviews and is the co-author of two books, Effective Lawyering: A Checklist Approach to Legal Writing, widely used by lawyers and law firms, and Hard-Nosed Advice From a Cranky Law Professor, a popular guide for new law students.

Parrish received the IU Bicentennial Medal in August 2019 in recognition of his distinguished service as dean of the Maurer School of Law at IU Bloomington.