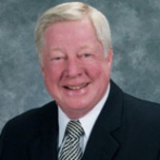 Larry Alt, of Valparaiso, Indiana, displays his passion for Indiana University in numerous ways, especially in his service to the Alumni Association. He was president of the IUAA Lakeshore Chapter in 2008-10 and is serving in that capacity again. Alt is a member of the IUAA Executive Council and serves on the association's finance committee. He chairs the Lakeshore Chapter's golf outing, which supports scholarships.

Alt has also become a familiar figure in the region as a local host for IU basketball games. The chapter honored Alt's work as a fundraiser for local IUAA scholarships by naming one of the largest grants in his honor.