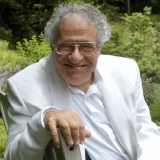 As a highly sought-after conductor, David Effron's 50-year-career has included appearances with major symphonies and opera companies throughout North America, Europe, Mexico, and the Far East.

For 18 years, he was on the conducting staff of the New York City Opera, where he conducted many performances, not only in New York, but also with the City Opera residencies in Los Angeles and Washington, D.C.

As a prominent educator, Effron taught at the Curtis Institute of Music and for 21 years, was head of the orchestral program at the Eastman School of Music, where he trained hundreds of instrumentalists now in professional orchestras worldwide.

His conducting students presently hold music director positions in the United States, Canada, Europe, Japan, and South America. Since 1998, he has been an active conductor at the Indiana University Jacobs School of Music, where he is chair of the Orchestral Conducting Department. He is especially honored and humbled that he has conducted opera productions of Der Rosenkavalier, Wozzeck, and Peter Grimes as well as 6 of the 10 Mahler symphonies at Indiana University.

Effron holds degrees from the University of Michigan and Indiana University. He was an assistant to Maestro Wolfgang Sawallisch at the Cologne (Germany) Opera House. He has been a Fulbright scholar and a recipient of a Rockefeller Foundation Grant. He was named Musician of the Year by the National Federation of Music Clubs, and was awarded an honorary doctorate degree from North Carolina State University.

Effron has conducted 105 operas and most of the standard symphonic works.